Is a cyclo sportive training plan useful for triathlon? If you are training for Ironman or long triathlon distance races then it might be a great idea to enter a sportive as part of your training.

It is a good opportunity to have a long ride with support and feed stations, and also can be used as added motivation if you happen to struggle with long rides.

A cyclo sportive training plan may well be integrated as part of any triathlon training plan because they are well organised events. Although not a race, they can be used as a race rehearsal – often race specific distances and terrain.

An example is the Tour of Pembrokeshire sportive 100 mile cycle event. It is the hardest I have ever done. It has 8000 feet of climbing! While it sounds tough on paper, nothing can prepare you for the sheer brutality of the North Pembrokeshire hills.

While training for Ironman my wife and I followed a cyclo sportive training plan. Specifically the Pembrokeshire sportive which is race distance and equally tough.

Cycling from St Davids, the smallest city in the UK thanks to its cathedral, the route circled North Pembrokeshire.

Hilly doesn’t do the course justice. Dipping into beaches and bays such as Poppit Sands and Newport at sea level, only to then ascend the highest passes in the area. Even the downhills were no respite. Concentration plus nerves of steel were needed to descend safely.

Personal challenges and a greulling day of cycling was shared by several hundred cyclists at the 2012 Tour of Pembrokeshire cyclp sportive.

A massive well done to Megan, Adrian, Shan, Sam and Sonia, who took on the cyclo sportive training plan and the challenge of the Pembrokeshire hills. All were pushed beyond their own personal comfort zones!

Disaster struck when we missed a route marker. We inadvertently ascended a major climb, unnecessarily adding half an hour to our ride.

At this point, which was about 30 miles into the 100 mile loop, I had quite a low moment. I was really frustrated that we had been doing so well, our average speed was well up on the same route a few weeks back, and we had lost all this time.

In hindsight, putting this silly error into perspective it seems trivial, but in my mind, knowing I had another 70-80 extremely hilly miles to go it seemed like a big deal.

Maybe I was tired going into the event, but I really did want to pootle back home at that point and it took all my mental toughness to keep going.

My feeling of frustrations were taken out on the following hills and my pacing strategy went out of the window as I put all my might into the next few hills.

Had this been an Ironman event that would have been a huge mistake, and even today with no marathon to run it was silly for as the ride progressed I sensed the deep persistent aching that will be familiar to those of us who push to the limit in high intensity interval training sessions.

Thinking a little more logically at this point I decided – had no choice – but to pace myself properly and hope to recover for a strong comfortable second half of the ride. To my surprise, I did feel better at about 60 miles in until the finish.

Hills hills hills. This was the order of the day and whether I am weakening in my older age, or just no longer have the mental toughness for the hills I used to relish, but by the last third of the ride I was not seeing the funny side. Don’t get me wrong though, the scenery is spectacular over the Preseli hills and well worth the pain.

My wife and I call it Lord Of The Rings countryside, and your hard work on the ascents is certainly rewarded with a great view at the top.

My problem was that I was ill-prepared for the ride, just rocking up without properly thinking about it and seriously underestimating the challenge.

If you are Ironman training and integrating it with a cyclo sportive training plan then I hope you take note and plan properly.

Lessons Learned From My Cyclo Sportive

I certainly have taken some valuable lessons home with me:

I was certainly unclear and had no goal on this occasion. My goal really today was enjoyment, so was an extra half hour of extremely hilly cycling really a negative? No, it was just more time in the saddle which is a good thing. If I’d been clear about my goal of enjoyment, I’d have enjoyed the ride a lot more I think.

The benefit of having a cyclo sportive training plan as part of my Ironmna preparation is the learning from this experience. This is extremely valuable.

So there we have it, a great day out in hind sight and a well organised event. Thank you for supplying Welsh Cakes at all the aid stations they were very much appreciated, as was the water and energy drink. A great training ride for the Ironman Wales in September this year.

Have you entered the Pembrokeshire or any other cyclo sportive as part of your training plan? I’d love to hear how you got on at the Tour of Pembrokeshire Sportive, or in your triathlon training in general.

Of course, if you want extra support you’d be welcome to register for the free 5 step triathlon email course in the sidebar of this blog, or register to become part of the triathlon team. 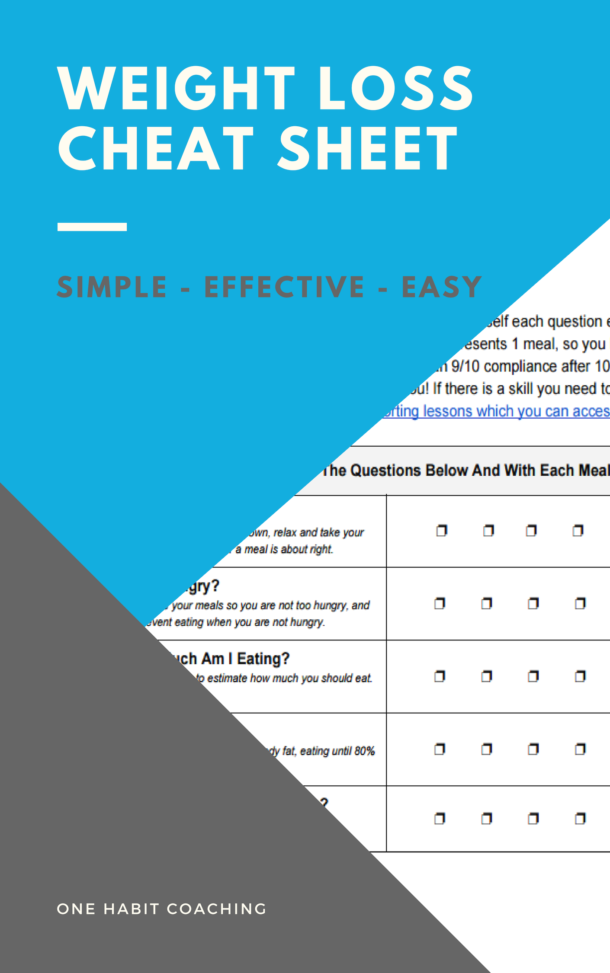 Start Losing Weight With 5 Small Habits That Have BIG Results.

Your Cheat Sheet Has Been Emailed To You